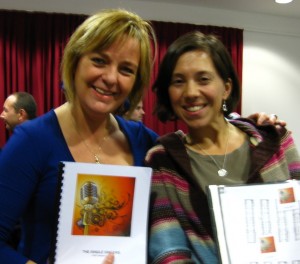 The Single Singers was originally created for the London A Cappella Festival in January 2012. Its founders, Annemarie Homan and Emily May ‘t Hoen, started the group as a way to give singers that were coming to the festival on their own the opportunity to actually perform in a group. The name was a twist on the renowned Swingle Singers, who were also the hosts of the festival.
After a social meet-and-greet and just two rehearsals, this international line-up of 24 singers put together five songs, which they performed for the first and only time on January 14.

Such a success was this endeavor, that the brand of The Single Singers has spread all the way “across the pond” to the United States!

One thought on “About”